skip to main | skip to sidebar

I showed some pictures previously of the process of building our hugelkultur bed. I can't remember how many of them I showed. A couple of weeks ago I began to suspect that something odd was going on with our cantaloupe beds. I had had one packet of cantaloupe seeds. I planted 3 hills each in 2 beds. One bed was a hill bed like you might plant with corn and squash. I cleared a rectangle and dug out 3 circles about 18 wide each and enriched it with old manure and alfalfa pellets. We then mulched all over the bed with straw.

I also made an experimental hugelkultur bed. We put branches on the ground that were mostly freshly cut. We tossed on pinecones and bark from the pine tree that fell and hit our house New Years day and had been laying in our yard. We tossed on some leaves and we put on a layer of manure. Lastly we tossed old sod on. I use my stirrup hoe and scrape the grass or mostly weeds rather on the ground to prepare a garden bed. The only dirt it pulls up is a thin layer attached to the roots. It looks similar to the sod strips people put in their yard only no one would buy dandelion sod. We placed that on the hugelkultur bed with the weeds facing down and the dirt side up. In my head I thought of it as a garbage bed. We made it entirely out of what people want to get out of their yard and dispose of in some way.

I didn't expect it to do much, at least not this year. But on the top of the bed we used a small shovel and lightly dug in 3 piles of red clay for planting. I had the extra seed so why not? I didn't get around to planting the cantaloupe in that bed till 2 weeks after planting the first. It did come up. I was worried about the plants getting enough water and having some where to put down roots since I planted in them a brush pile basically. Recently though I would glance off the front porch at the two cantaloupe beds side by side and wonder if I was seeing things. Was the hugelkultur really looking better than the traditionally planted one? See for yourself. Here they are side by side: 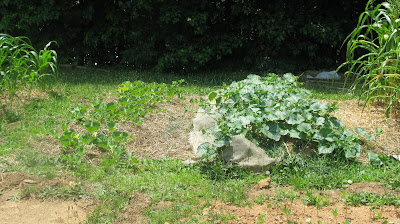 Here is the hugelkultur bed. Look how gorgeous and green and lush these leaves are? That is a burlap mulch but weeds are growing through. It was the start of an experiment I never finished. David keeps asking me if I am sure I used the same seeds. I used the same seeds from the exact same packet. 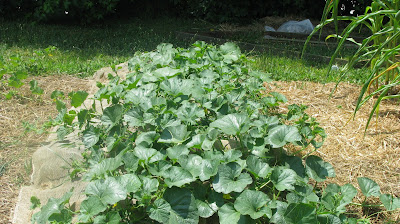 And the sad traditionally planted one is here. It looks like it's missing something doesn't it? And this had a 2 week head start. 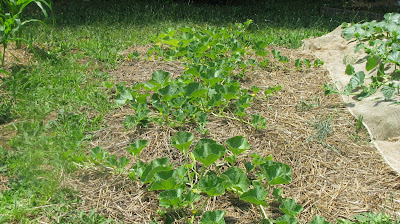 I think amazing is not an over exaggeration here. I am amazed! I had wanted to apply some alfalfa pellets to the hugelkultur one but never got around to it. They have both received 2 applications of actively aerated compost tea. That's for another post though. One thing that stands out in my mind is how the branches in the bed are supposed to have the ability to hold in large quantities of water in the soil. Permaculture design does place an emphasis on finding ways to help your yard hold water in the soil. I am too tired to elaborate on how and why and I just remembered a hose turned on earlier today/yesterday and wonder if it was ever turned off :( But I now have some exciting plans for all the trees we recently cut down.

Here is a photo of these same beds taken earlier for comparison: 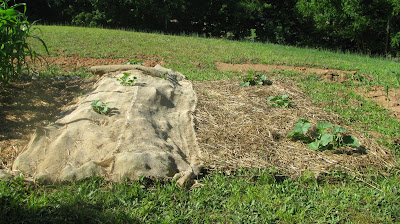 It's taken from the other side of the beds so that is the hugelkultur bed on the left and you can see how the plants are smaller than the ones in the bed on the right. See how lumpy that bed is under the burlap? Not a finely prepared garden bed!
Posted by Saponaria at 12:57 AM

I loved reading your blog :) Your post over on soil and health gave me the link. When we lived in Louisiana I grew banana trees and then every fall I would cut them back and use the trunks and leaves to build beds like your hugelkultur beds and they also did very well. Where we live now I have very sandy soil and no banana trees, but I ought to try something similar to that. Right now I'm just growing buckwheat to till in at every chance. Visit me sometime at my blog: blog.ancientearthwisdom.com

M,
I need detailed instructions for the hugelkultur. :) WOW!

Would it be ok with you to use photos of your hugelkultur in a newsletter article I am writing for a small publication in Washington State? Here is a link to our website: www.snohomishcd.org.
Thanks! LR

That would be fine if you would credit the blog. Do you have an email address I could reply to?

Very nice. How high did you pile the soil over the logs?

I put about a foot of dirt over my wood branches. I also let it sit over one season to compost down some.

Enjoyed finding your post on hugulkultur. Am wondering about any further experiments you may have tried and how you feel about your hugulkultur bed(s) now?
Also... May I use one of the pictures in my powerpoint presentations I occasionally give in public. Happy to give you credit and to link folks to your blog if you like.
Thanks for sharing this Saponaria...

Wonderful! Thanks much! What does one bed have burlap and the other doesn't? Also, what is aerated compost tea? I know what compost tea is, but... Also, for more info., here's a great link, http://www.richsoil.com/hugelkultur/ to an article on hugelkultur, and as well, go to Permies.com and join the discussions, it's really fun! And as well, try becoming a fan of Paul Wheaton's site on facebook: https://www.facebook.com/pages/Hugelkultur-Log-Based-Low-to-NO-Water-Gardens-The-PermaBerm-Method/192188357546360

This is one of my favorite posts..before during and after! I have been very excited since I first discovered hugelkultur and this post is a factor in the building excitement. Thank You! I'm sharing this regularly!!

I'm glad it's encouraging and you enjoyed it. I absolutely love to garden and the permaculture practices I have tried have over all been very successful.

I ran across your blog when researching HugelKultur. Thanks for posting and com visit and follow me at theredeemedgardener.blogspot.com. I may link this as well.

Thanks for this old post, it help inspire me to do hugelkutur this year, 2012.

Been getting great results with some good comparison photos.

Also found out that "vertical hugelkultur" is even better than laying logs down horizontally.

See my own picture results at: